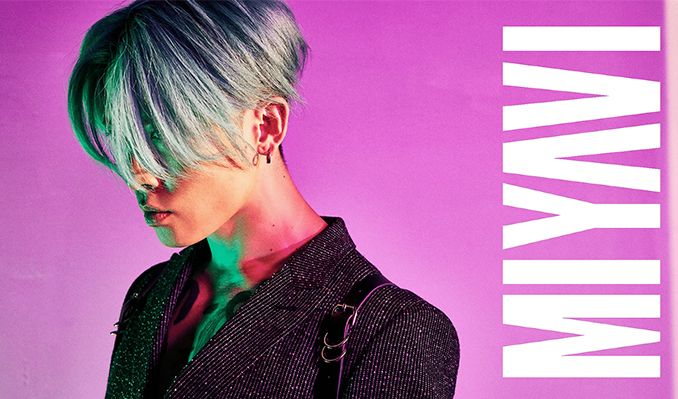 In May 1999, after quitting high school at the age of 17, Miyavi moved to Tokyo with only his guitar in hand. The following month, he joined the band Due' le quarts as guitarist. Though being the youngest member, he composed, wrote the lyrics, and arranged their songs. Later, in September 2002, the band broke up, and he made his solo debut the very next day. Miyavi held his first solo concert at the SHIBUYA KOUKAI DOU (Shibuya City Concert Hall) in April 2003. Then in June, Miyavi starred in the movie 'ORESAMA'. In October, he held his second solo concert at the HIBIYA YAGAI DAI ONGAKU DOU, (Hibiya City Open Air Music Hall) with backup band members such as PATA, from the band X JAPAN, SHINYA from the band LUNA SEA, Luke from the band SEIKIMATSU, and Chirolyn from Hide with Spread Beaver. Miyavi's last indies album 'Galyuu', positioned number 1 on the Japanese Oricon Indies Chart. In August 2004, he held his first fanclub event at the Tokyo Domeand held his last indies concert at the prestigious BUDOUKAN. In 2004, Miyavi was signed with Universal Music and made his major debut with the hit single 'ROCK NO GYAKUSHUU'. He then released the album 'MYV-POPS' in August 2006, which contains 7 consecutive top 10 hit singles. Miyavi held his 25th anniversary (birthday) concert 5 days in a row in September, collaborating with talented artist such as a beat boxer, tap dancer, wadaiko drummer (Traditional Japanese drums) and painter etc.

He then went to Los Angeles, USA soon after to study abroad. He polished his performance and language skills through street performances. In February, 2007, Miyavi made a secret appearance at the MGM Grand in Las Vegas with a local DJ from Rock Steady Crew and a percussionist. Later, he came back to Japan and formed the group 'KABUKI DANSHIz'. In June of 2007, Miyavi joined the super band S.K.I.N with YOSHIKI from the band X JAPAN, GACKT, and SUGIZO from the band LUNA SEA, and performed in L.A. Then on May 14, 2008, Miyavi kicked off his first world tour with 36 successful shows in 14 countries with a total audience of 150,000 people. With powerful concerts in USA, Chile, Brazil, Germany, Netherlands, Spain, England, Sweden, Finland, France, Taiwan, Korea, China and domestically, Miyavi was able to wrap up his tour successfully with his Grand Tour Final in Tokyo. Then in February 2009, he announced his decision to go independent and graduate from his management which he belonged to for 10 years. On April 5, 2009, Miyavi held a sold out concert at the HIBIYA YAGAI DAI ONGAKU DOU (Hibiya City Open Air Music Hall). April 8, 2009 Miyavi launched his own company, J-glam Inc. On September 14th, Miyavi kicked off his second world tour 'NEO TOKYO SAMURAI BLACK TOUR 2009' with a show in Tokyo, celebrating his birthday and the commemoration of the official fan club C.W.I.F. 'Co-Miyavi Worldwide International Family'. This tour being larger in scale compared to his last, is still on-going with 40 shows in 20 countries, and will be the largest world tour any Japanese artist has ever pulled off.

MySpaceOfficial WebsiteFacebookTwitter
*Service and handling fees are added to the price of each ticket.